VANCOUVER, BC - JANUARY 18: Loui Eriksson #21 of the Vancouver Canucks is congratulated by teammates Quinn Hughes #43, Tanner Pearson #70, Bo Horvat #53 and Troy Stecher #51 after scoring a goal against the San Jose Sharks in NHL action on January, 18, 2020 at Rogers Arena in Vancouver, British Columbia, Canada. (Photo by Rich Lam/Getty Images)

Parity is the biggest buzz word in the NHL this year and you only have to look at the Pacific Division for proof. Just ask the Vegas Golden Knights.

Maybe apart from the Central Division, there is a real battle for playoff and Wild Card spots in the remaining three divisions, a reality the Vegas Golden Knights are currently grappling with.

As we enter All-Star week, the Golden Knights are currently fourth in the Pacific but just one point behind the Vancouver Canucks, who lead the division.

Vegas is tied on points with the Calgary Flames and the Edmonton Oilers, although the Knights have played one more game than the Flames and two more than both the Oilers and the Canucks.

And, to throw another caveat into the mix, the Arizona Coyotes are also on 57 points and they have played the same amount of games as the Golden Knights.

That gives you some idea as to how competitive or bad this Pacific Division is this year, and all five teams that are in contention will no doubt be buyers at the Trade Deadline.

But, of all the teams the Vegas Golden Knights are battling with for the Pacific Division crown, are the Vancouver Canucks their biggest threat?

It certainly seems like it at the moment and we are going to attempt to map out why we think the Canucks will be the main contenders for the Pacific along with Vegas.

For starters, Vancouver seems to be hitting their stride at just the right time having won eight straight games on home ice, while they have won 11 of 14.

In simple terms, the Canucks are absolutely rolling right now and they aren’t showing any signs of slowing down.

Granted, they were plagued by inconsistency during the first-half of the 2019-20 regular season, but you can put that down to the young age of this team.

According to RosterResource, the Canucks have the 4th youngest roster in the NHL with an average age of 27.3.

So, teething problems are to be expected in that scenario but Vancouver seems to be working it all out and they are playing at the peak of their powers right now. 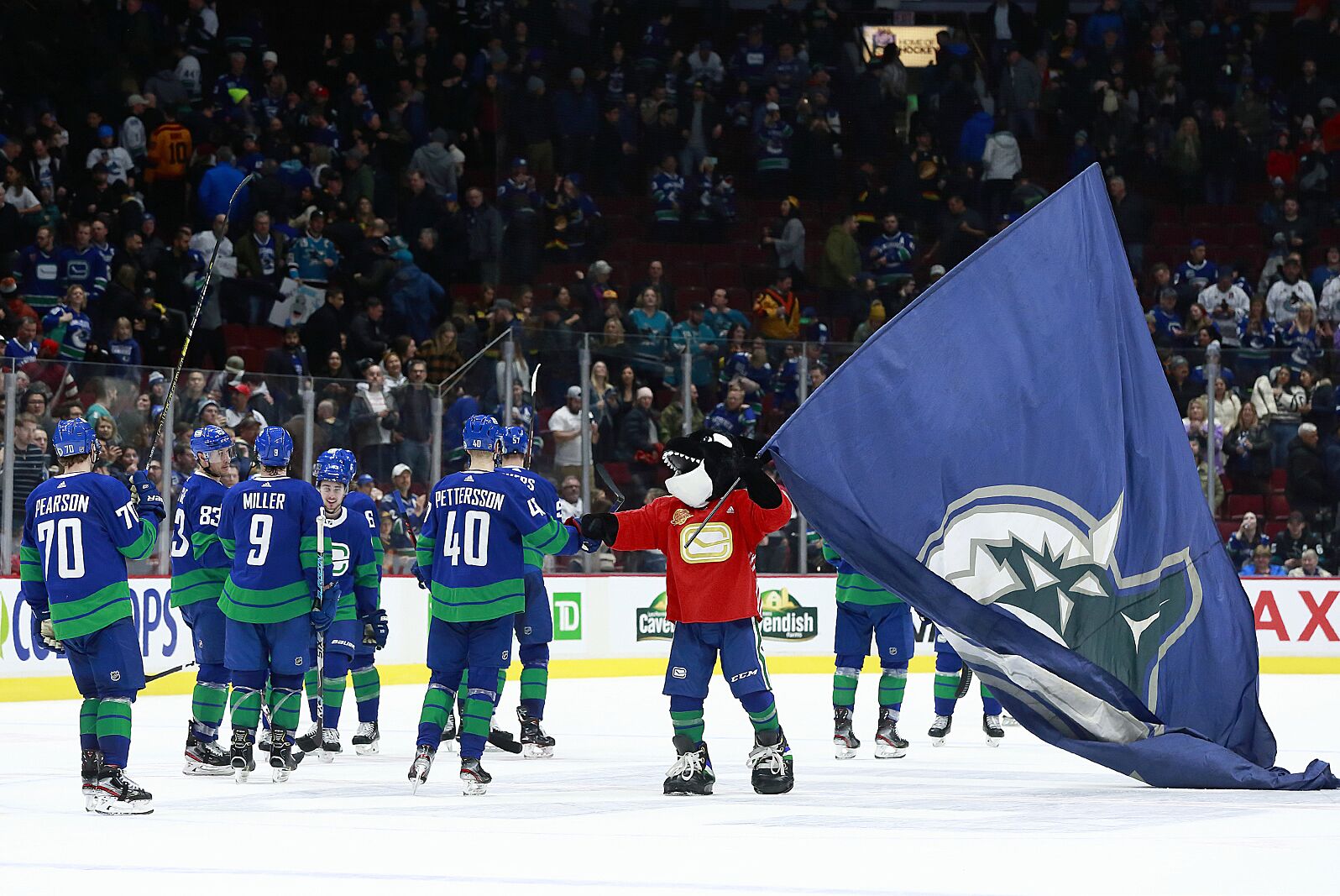 In terms of special teams, the Canucks have the 7th best power play in the entire National Hockey League (23.8), while they are ranked 16th on the penalty kill (80.6).

Vancouver, interestingly, also ranks 2nd in the NHL in faceoff wins (53.6),  but the most impressive factor about this team is their young core.

Headlined by phenom Elias Pettersson, who leads the team in points with 51 (21 goals, 30 assists), the Canucks boast a plethora of young and potent weapons.

Brock Boeser is continuing to prove why he’s considered one of the hottest young forwards in the game with 16 goals and 27 assists for 43 points, while Bo Horvat has recorded 42 points (16 goals, 26 assists) through 49 games.

Then there is rookie sensation Quinn Hughes, who has set the league alight this year with five goals and 29 assists for 34 points and, as a result, the blueliner will be at the 2020 NHL All-Star Game this weekend.

Vancouver also made some shrewd additions in the off-season, none more so than gritty forward J.T. Miller who has exploded offensively this year with 46 points (17 goals, 29 assists) in 49 games.

The Canucks are also getting great goaltending from Jacob Markstrom who is 18-13-3 this year with a 2.71 Goals Against Average and a .916 Save Percentage.

All in all, this Vancouver team boasts a vast array of weapons and they are generally a sound hockey team. 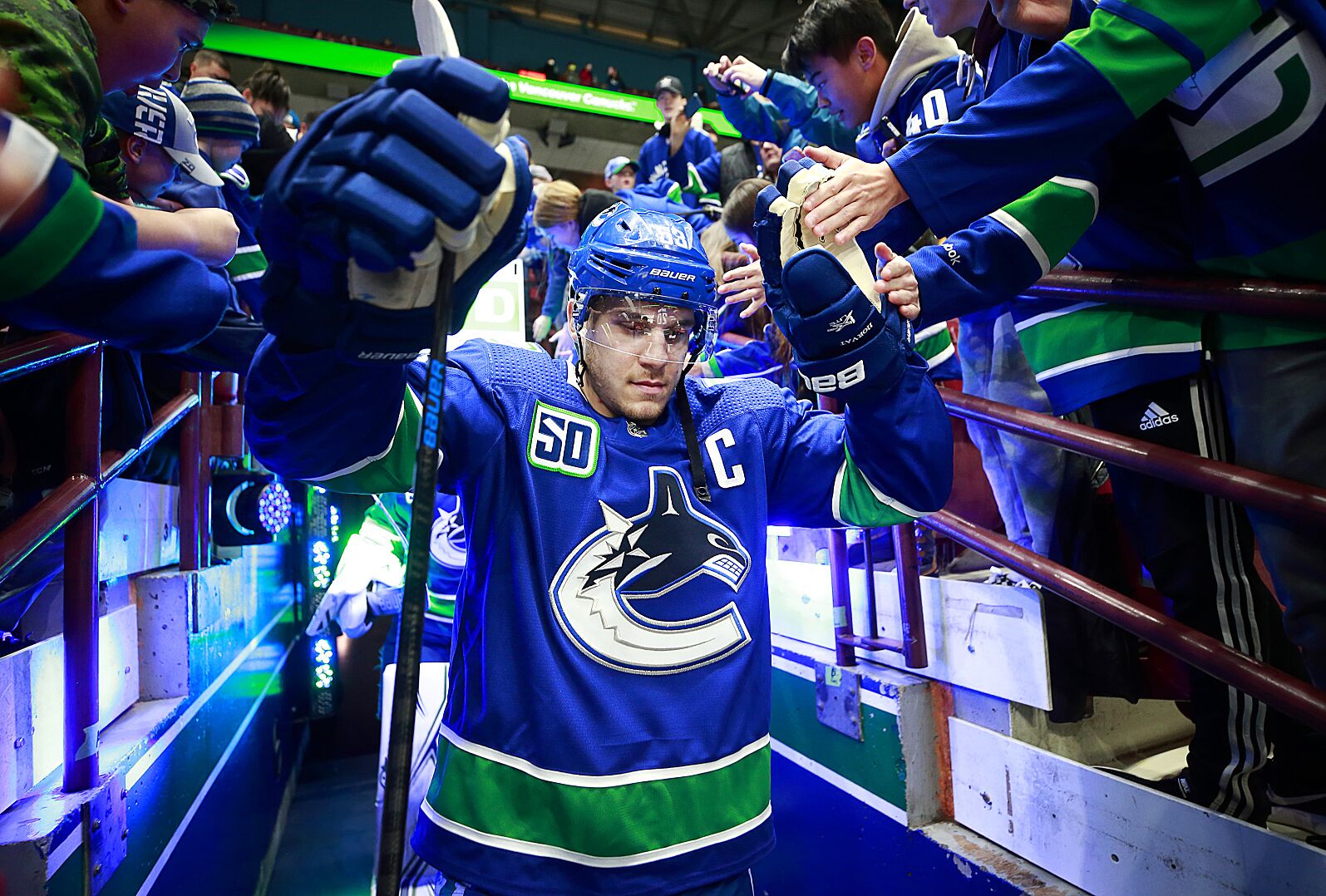 VANCOUVER, BC – JANUARY 16: Bo Horvat #53 of the Vancouver Canucks walks out to the ice during their NHL game against the Arizona Coyotes at Rogers Arena January 16, 2020 in Vancouver, British Columbia, Canada. (Photo by Jeff Vinnick/NHLI via Getty Images)”n

They rank good to very good in a number of metrics and they shouldn’t fall victim to natural regression, unlike the Arizona Coyotes and the Edmonton Oilers when you study NaturalStatTrick.com.

There isn’t much cash to splash at the Trade Deadline for reinforcements unless Vancouver can shift some contracts, although they boast enough depth in terms of firepower and on the blueline.

The one major concern for the Canucks will be if the elite goaltending play of Jacob Markstrom drops off, but if he can maintain his current play or even be solid then Vancouver is in great shape down the stretch.

They have a number of young, talented forwards on pace for career years, they have a deep blueline, stacked depth and a goalie in Markstrom who is having a career year.

Next: Stastny the hockey guy, other takeaways from shootout loss

Throw all those ingredients into the mixing pot and you have a young, dynamic team that looks set to pose the biggest challenge to the Vegas Golden Knights when it comes to slugging it out for the Pacific Division title.